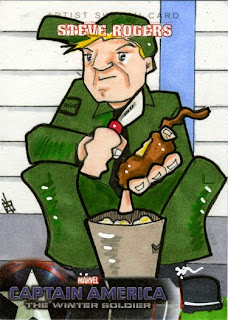 This card is also a subset within the sketch cards which are “character cards” (essentially Upper Deck pre-printed different character names onto 10 cards, this is the 2nd of my 10)

The 20th of 75 sketch cards done for the Captain America, The Winter Soldier trading card series by
Upper Deck.