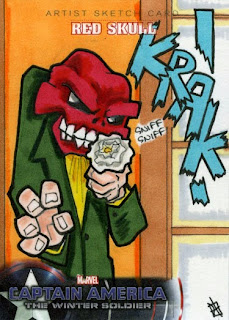 Going back to Tales of Suspense #80 (1966)...I found this scene really stood out; Wolfgang, lackey of Red Skull, fails at a mission…the skull walks out of the room and Wolfgang clearly kills himself and the Skull rejoices….I guess the comics code people didn’t pick up on that…

This card is also a subset within the sketch cards which are “character cards” (essentially Upper Deck pre-printed different character names onto 10 cards, this is the 8th of my 10)

The 58th of 75 sketch cards done for the Captain America, The Winter Soldier trading card series by
Upper Deck.